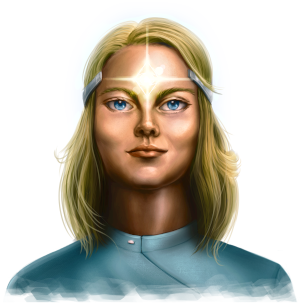 “Commander Yanashi, we have completed the scans of the planetary defenses. The only effective weapon we can use against them are tachyon bombs. Unfortunately, we cannot prevent the loss of life of about ten to thirty of the installation operators, if we use them.”

Yanashi stared down at the planet through the large window of the bridge. She marveled at the swirling purple clouds and the occasional gap where the brown surface beneath them peeked through. 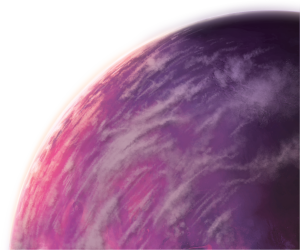 “It’s a beautiful planet despite all the pollution. Two billion people will be very happy to be liberated. What do the psychics predict?”

“Nothing. There’s too much interference. Though one of the empaths claims to feel ‘bright light.’”

Yanashi was silent. Colonel Ajena placed her hand on Yanashi’s arm and spoke softly: “It is for the best this way. The High Council has decided this is important. It will be a decisive blow to the Orion Empire.”

“Well, it’s easy for them. The karmic consequences of those deaths will be on me.”

“So you’ll give the command?”

A young ensign suddenly rushed in: “Sir! We just received communication from the Orion home world. Apparently the situation has changed. The Emperor has been overthrown and the Orion Republic reinstated. Their military and other leaders have also switched over to the Light.” 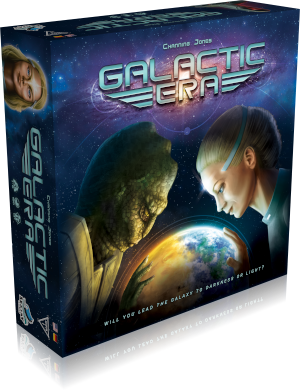 My aim in designing Galactic Era was to bring something new and innovative to the genre of heavy space strategy games, and also provide for deep strategic play within an afternoon or evening. After six years of work, this is the result: a space empire builder for 1-6 players, playable in about 3 hours. Many of the important decisions you make in this game, as well as the negotiations for trading, happen simultaneously. This significantly shortens the downtime.

The level of randomness is quite low in this game. You don’t use dice for combat. Some players have termed it “chess in space.” I like it because it rewards strategic planning. Combat is still uncertain though, because there is “fog of war.” You can hide the size of your fleets. This leads to interesting possibilities of bluffing and misdirection.

New to this genre, though, is the concept of alignment. Each faction, termed “star people”, can be played either on the “light” or the “dark” side with the appropriate consequences. You can be a beacon of morality in the galaxy, keeping the peace with like-minded people and not fighting unless attacked first. Alternatively, you can forgo all constraints and strive for infamy, attacking whomever you like whenever needed. You can also change your alignment during the game. Both sides play equally well.

The five technology tracks present an interesting dilemma. The highest levels are extremely powerful, but also hard to reach. You can usually only do it in one technology. Using the synergies between multiple technologies at medium levels can also be effective.

Everything in the game is woven into a detailed backstory, inspired by my research into the many claims of those who supposedly have interacted with UFOs and extraterrestrials.

This ‘adstory’ is intended to appear in GAMA’s “Around the Table” magazine.