On Sunday, November 17th 2019, I played a session with 3 players, two of which were new to the game.

I am yellow playing the ICC (STO), Blue has the Avians (STS) and Green the Plejars (STO).

My starting sector is Rigel (B side) which gave me level 2 in Robotics. Green has the Pleiades which gives her level 2 in Propulsion. Blue has Arcturus which gives him a third growth action in the first round. The center sector is Khaa (A side).

My domination card (secret objective) is Military. This would mean I would have to build a lot of ships and increase my Military technology level.

The galactic story is Galactic Migrations. We are not playing with any galactic goal, because this is an introductory game. 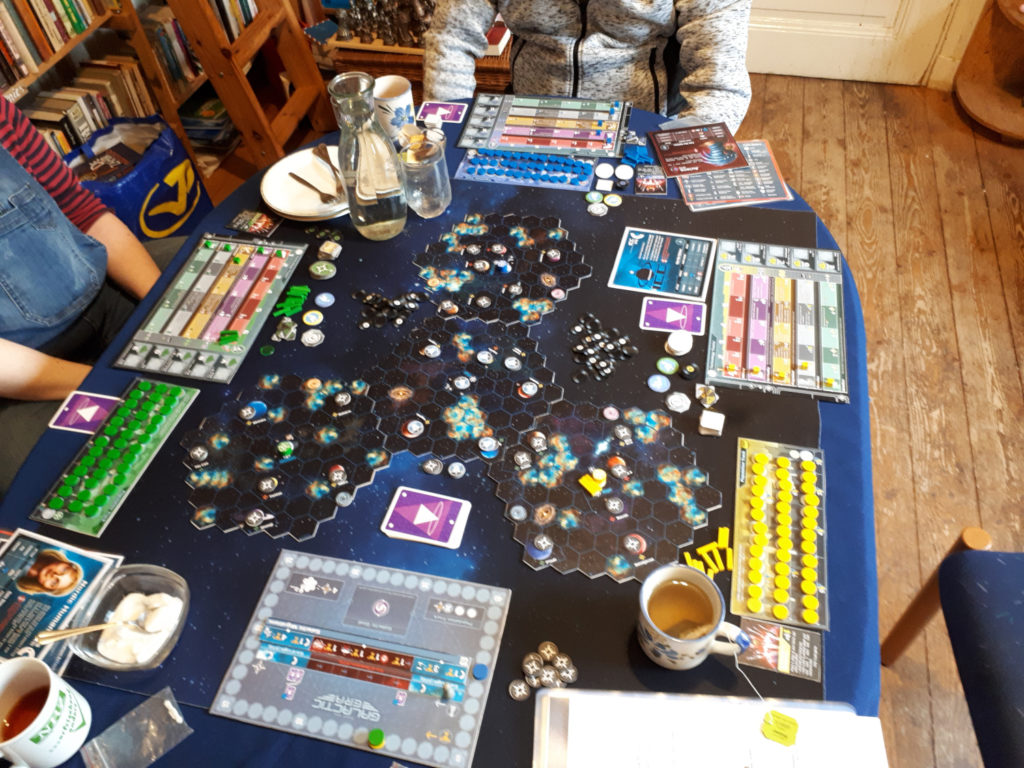 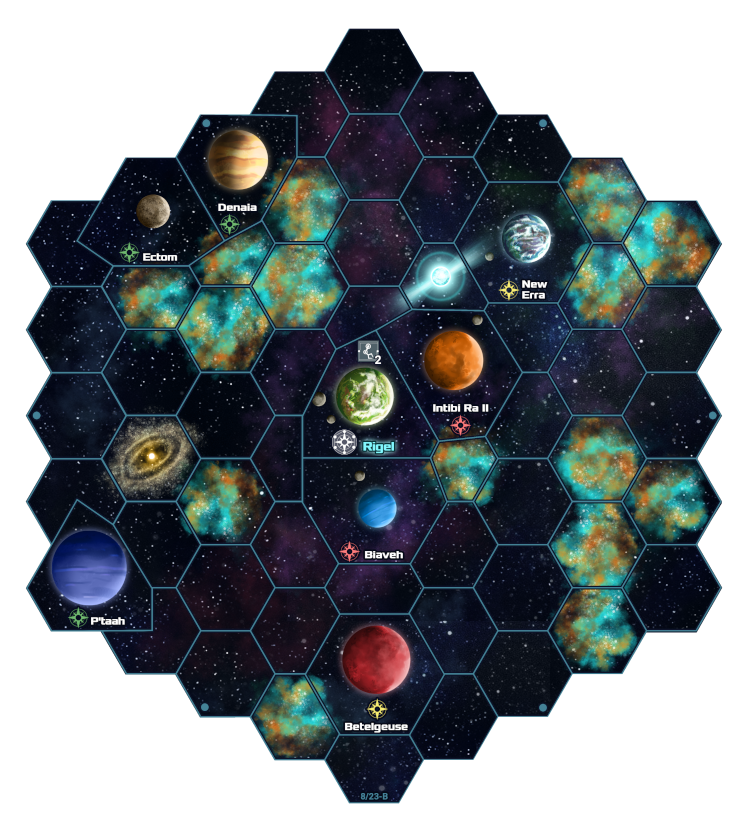 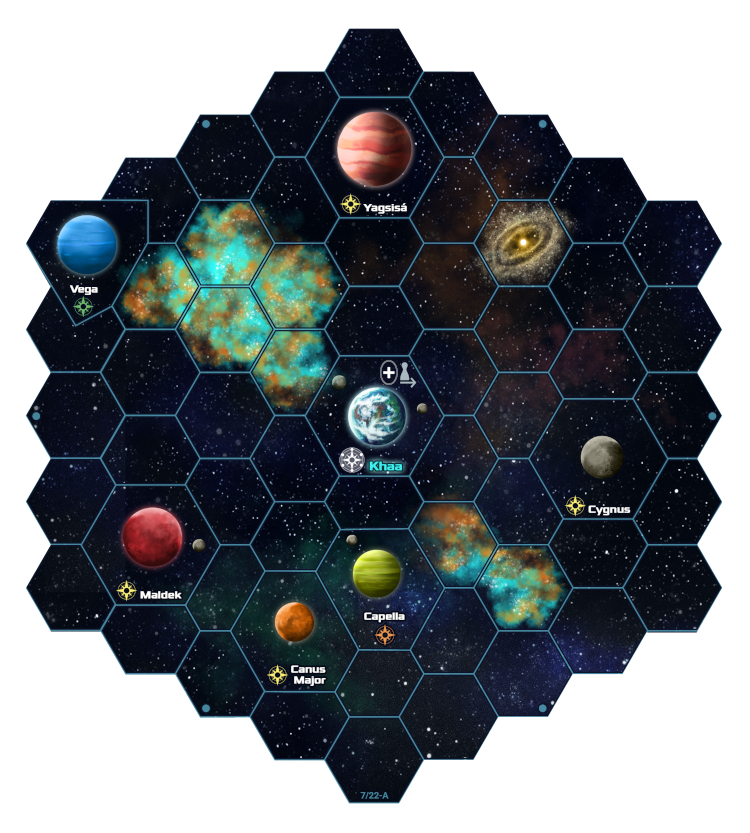 Sector Khaa (A) – the center sector

One the first round the first thing I do is create my fleet D by at my home star (Rigel) and put one of my three ships into it. I fly to the one star in my sector at a distance of 4 from my home star, I need 5 range though because I am going through a nebula. As ICC on the STO side I’m starting with Propulsion 2 though so all my ships have range 4 and so 5 with fleet D.

As luck would have it the star (P’taah, see bottom left corner of the sector) is an advanced civilization. This makes it easy to grow it to a 5 population star later (which allows me to buy an extra growth action each round). All I need to do beforehand is increase my Genetics to level 2.

I send another ship to the asteroid system in my sector, so I can get an extra ship when building ships.

I send my third ship towards the center and enter a nebula hex. This means this ship will have 2 extra range next round.

On my turn I do Gain Star (ally) to take P’taah, which means I get 3 population there.

I then Build Ships. I get 3 ships from my 9 population, +1 ship from the asteroid system I am visiting and +1 ship from Robotics 2 (which I started with) for a total of 5 ships. I place these ships at my home star (that is the only place I can put them at currently).

There is no trading because nobody is in contact with anybody.

At the end of the round I score 1 point for being STO.

At the end of round 1 the situation looks like this: 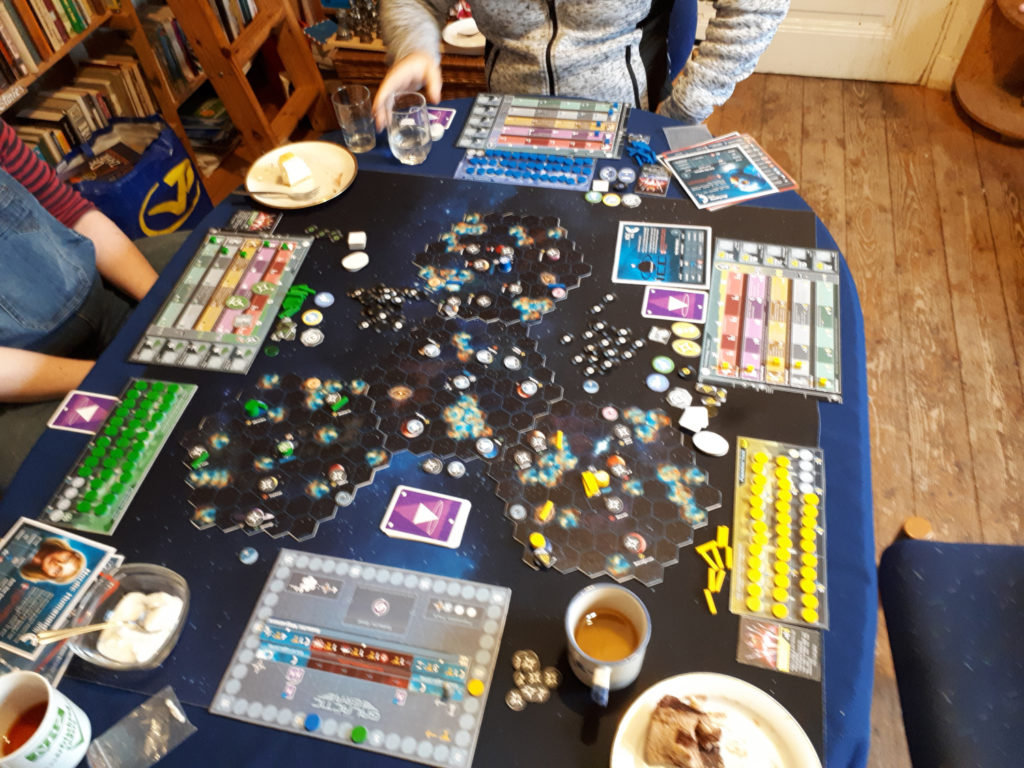 I have plenty of ships now. I send one ship to the wormhole on my right side to meet Blue there. I hope that I can trade with him. I send another ship through the wormhole to my left, to enter Green’s home star sector. I want to be in contact with both players, because my special ability as ICC allows me to trade with both.

I move another ship into the center sector and scout Maldek. I discover another advanced civilization (I got a bit lucky in this game) together with the Ancient Technology relic that gives me +1 level in Robotics.

This is the game now at the end of movement: 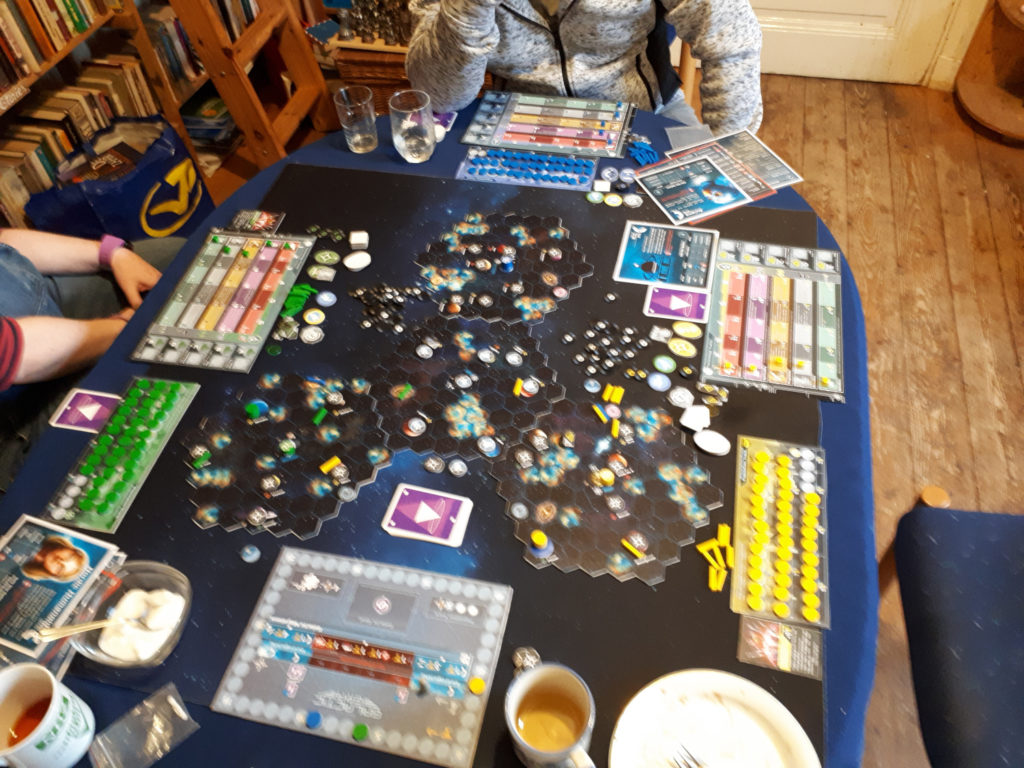 As my two growth actions I do Research Genetics (which brings me to level 2) and Grow Population. My star P’taah has 3 population but is 4 hexes away from the nearest player-owned star (my home star) so it grows by 1 to 4. Then I also get 1 bonus population which I also place on P’taah bringing the total population there to 5.

In the trading phase I trade with Blue. I teach him level 2 in Robotics and he teaches me level 2 in Spirituality.

At the end of the round 2 I score 1 point for being STO and 3 points for having done the Grow Population action, because of the galactic story (Migrations). I now have a total of -1 points (I started with -5).

This is the first round of the Era of Darkness. Players now score points for being STS, at war, winning battles and taking stars from other players.

Players can also swap their domination card now. I choose to swap mine, because my current card (Military) does not fit with my plans. I draw the Economic card, which suits me much better.

I explore more stars in the center sector. Having a remote view (because of Spirituality 2) is useful for this because I can check out one of the stars before I go there. I discover that the center star of that sector, Khaa, is only uninhabited but has the Ancient Pyramids, which is very nice for growing population.

I also discover that Denaia is the other advanced civilization in my home star sector. I will definitely want to take that star later.

I also now come into contact with Green. Unfortunately, Green does not have any technology levels that I could learn. 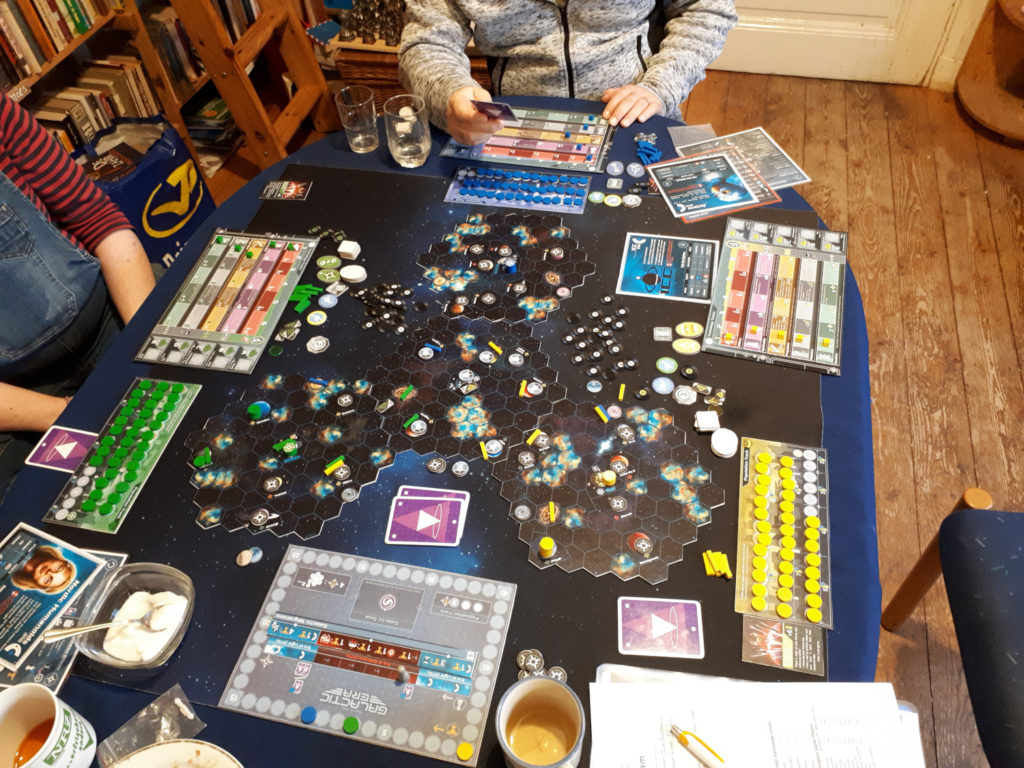 The other two players each switched to the STS (dark) side. It looks like there may be conflict soon, or perhaps they just want the points for being STS now that we are in the Era of Darkness.

I can do three growth actions now (because of my star P’taah with 5 population). I first take Maldek in the center sector giving me 3 population and +1 level in Robotics. Then I research Robotics, bringing me up to level 4. Finally I do Grow Population. This means Maldek can grow by 1 population, bringing it to 4, and then with the 1 bonus population I bring it to 5.

So I have two stars with 5 population each (not counting my home star) now. This means I could do 2 additional actions next round. I will have to see if it’s actually worthwhile doing two additional actions, because I will be losing 6 points then every time I do it.

In the trading phase I again trade with Blue. I get Propulsion level 3 and teach him another level in Robotics.

Having lost 3 points for doing an additional action, my score is now -4. 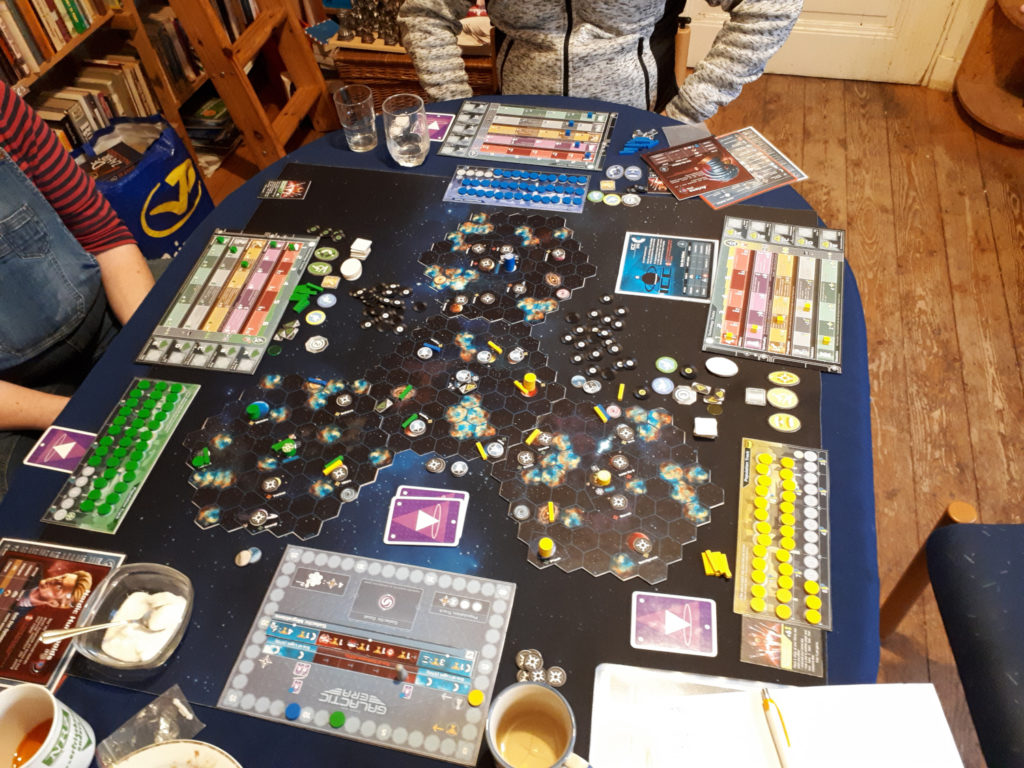 I continue to explore the stars in the center sector. Canus Major (near Maldek) is another advanced civilization and has the +1 Military relic. I also move to another two asteroid systems (one in the center sector and the other in blue’s home star sector) as I am planning to build ships this round.

Doing an additional action again I lose another 3 points.

First I do Gain Star at Canus Major to get the population and the 1 level in Military. I now have Military 2 which gives me an advanced fleet tactic. I put the counter on fleet E with the “x2” side face up. This means I can retreat with fleet E from combat after the attacker has revealed his ships there.

Then I also research Robotics bringing me to level 5.

I have fulfilled my Economic card (needed to build 10 ships or more on my turn), so I get the 7 points for that and can also place an additional 6 ships. 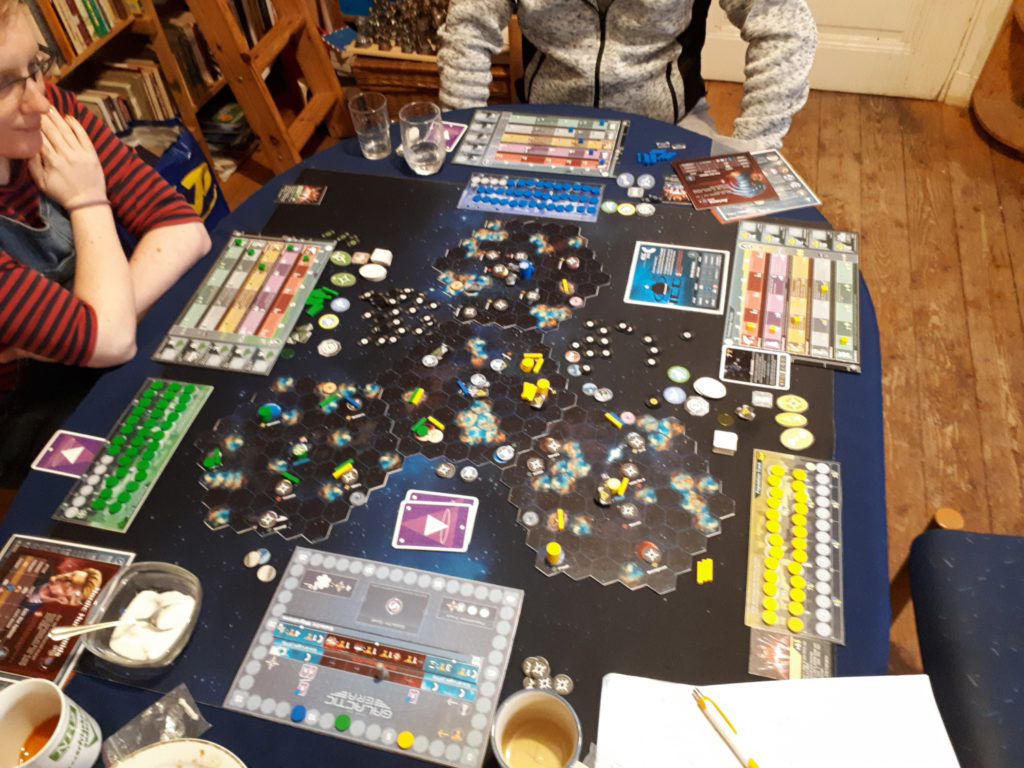 Round 4 end (note: I have not subtracted the 3 points for the my additional action yet. I corrected this later)

Blue declares war on me on his turn. He can do this easily because he is on the STS side. He attacks and destroys my ship at the asteroid system in his home star sector.

On my turn (I’m taking my turn after him) I counterattack and win two battles myself against Blue, which gives me 2 points. 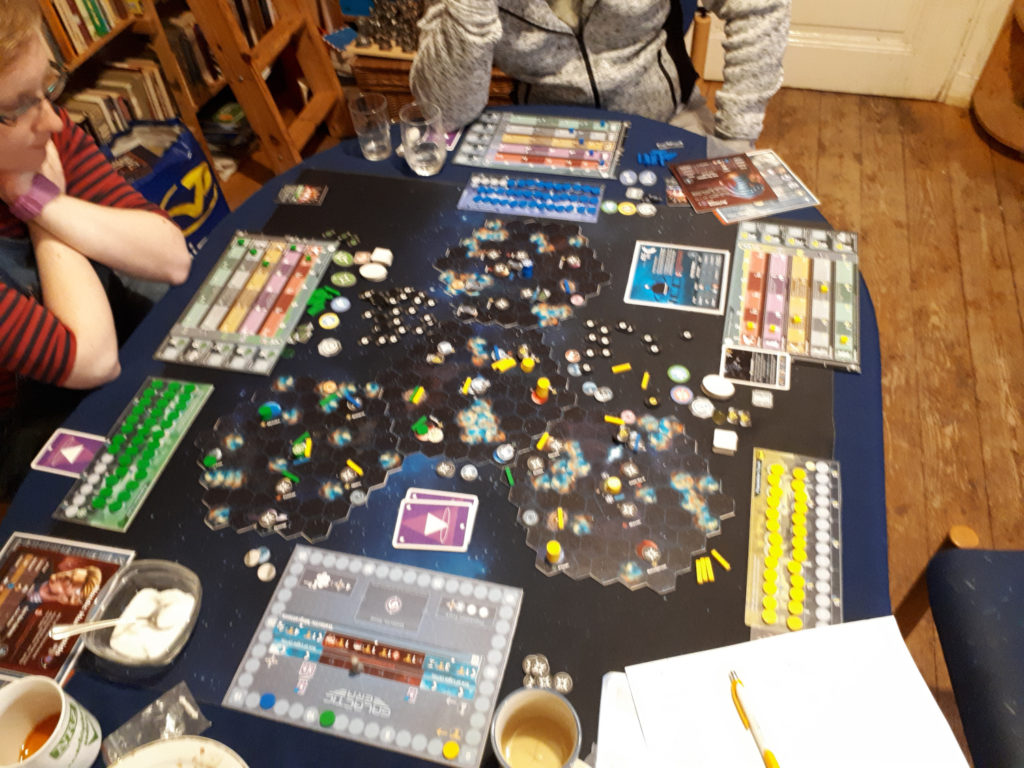 As fourth action I Grow Population.

Green and Blue trade with each other.

I use stargate 1 movement (because I have Propulsion 3) to jump with my large fleet at Maldek to my home star. I need more ships at my home star because otherwise I would not have enough ships to defend against Blue.

Meanwhile, I am keeping a ship at Vega (disguised as a fleet) to prevent Green from taking that star. It is a primitive civilization and if she tries to take that star I can use that as a reason to declare war on Green.

I research Robotics and Genetics. Since I already have Robotics at level 6 the effect is that I go up two levels in Genetics instead. I now have Genetics level 5. This costs me 2 points though. I lose another 3 points for doing the additional (third) action. 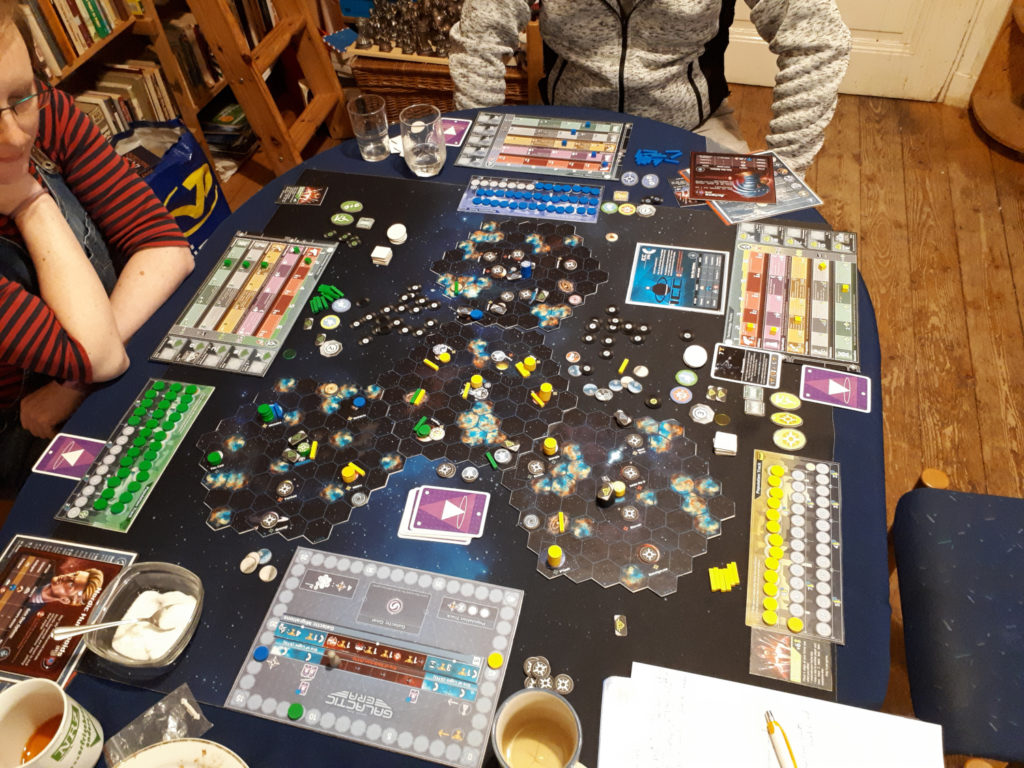 We now enter the second Era of Light. Players now score for being STO and researching (if you are the only player to research a field you get 4 points). The other players get their second domination each because they have not played any yet. I decide not to swap my card.

Blue moves his fleet to New Erra. Since he is threatening to take this star which is in my home star sector I move my large fleet there on my turn (I am third in turn order). Blue has a higher Propulsion than me so he can avoid the battle by retreating before combat. He retreats to the wormhole where is other fleet is. This is a smart decision by him because I would have destroyed his fleet.

Then I Grow Population. This gives me 6 bonus population which I spread out over my stars. I now have 39 population on he map (which is a lot). I am only 6 population below the maximum (which gives me 60 points).

Then I Build Ships which gives me 20 ships (also a really large amount), about half of which I place into a new fleet at my home star.

I score a point for being STO. 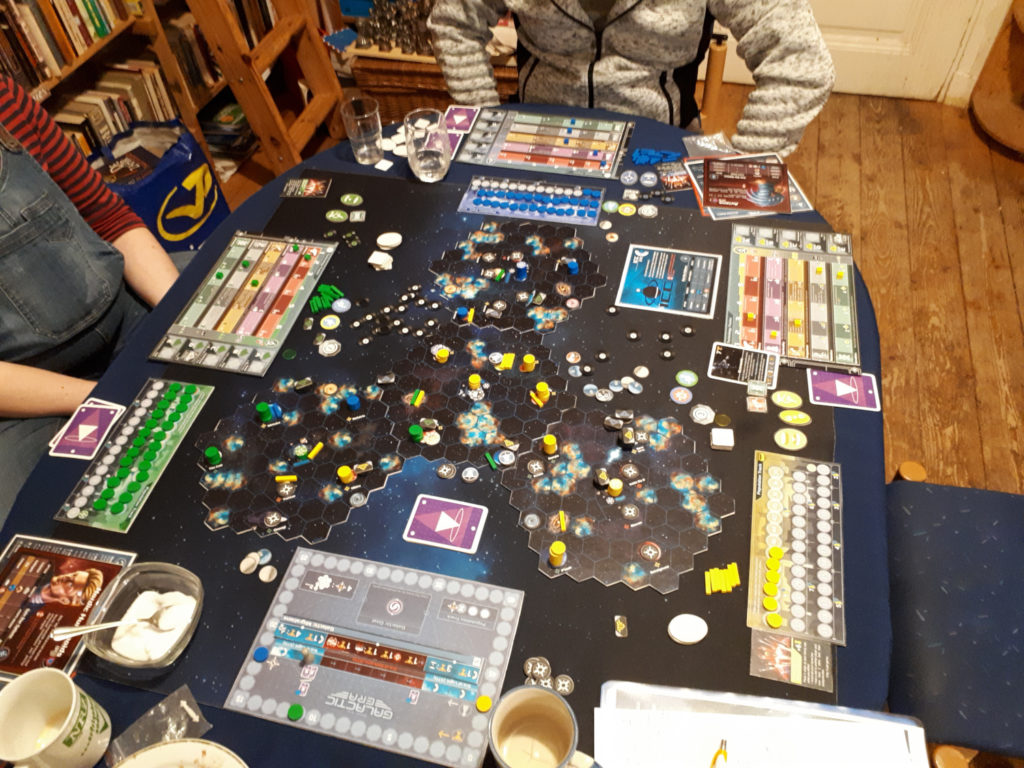 Green brings over some more ships to Vega. She declares war on me so we would have to fight a battle there. I choose to retreat before combat (which I can do because I have higher Spirituality), because I would otherwise lose the battle. Thus Green can take this star later in her turn of the growth phase.

Blue combines his two fleets at the wormhole and then moves to Initibi Ra II (also in my home star sector).

He obviously is desperate to take a star in my home star sector. I want to prevent that so I can score better for my Defensive card (for the B effect). So I combine my fleets and move to Intibi Ra II. Blue decides to risk it and not retreat before combat this time. Unfortunately for him my fleet is a lot stronger than his. I have a total of 48 combat strength and he only has a total of 20. I destroy all of this 10 ships and then lose 5 ships myself.

Afterwards I find out that Blue had the Exploration card and would have gained 13 points for having a star and a ship in each of the 4 sectors. He was not able to do this though because I (unknowingly) prevented that.

I research Military (now level 4) and Spirituality (now level 3). I am the only player to research those two fields, so I get 8 points for that.

Then I Grow Population. This gives me another 6 population, so I’ve maxed out my population which will give me 60 points at game end.

I score another point for being STO. 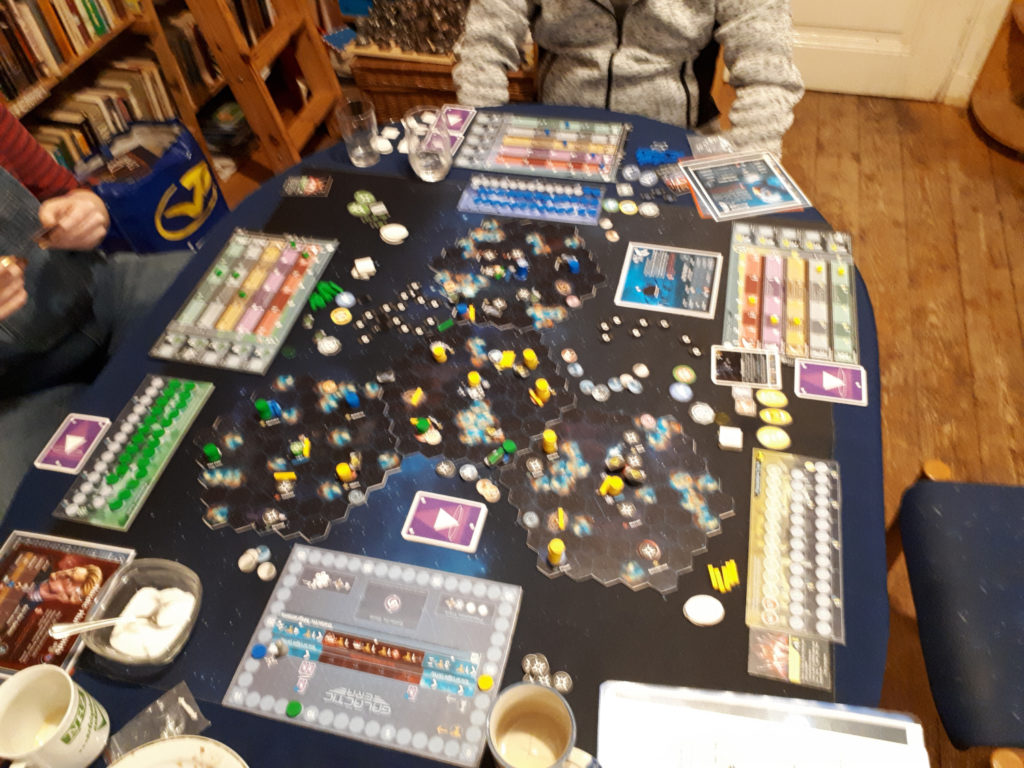 Blue scores 17 for population. He can only score 4 points for his Exploration card (B effect) and nothing for his Central card (since he has no star in the center sector).

Green scores 21 for population. She plays her General Scientific card (A effect: have 16 tech. levels) for 9 points. She also plays her Density card (B effect) for 4 points.

I score 6 points for the B effect of my Defensive card (4 for no other player having a star in my sector + 2 for half my Military tech. level).

I score 60 points for my population (the maximum you can get for population).

The total playing time was 2 hours and 25 minutes.